Spider plants are tough plants that only need a little TLC to thrive. However, if the plant owner fails to care for their plant or ignores its demands, the spider plant may succumb to root rot. Your spider plant’s survival could be jeopardized by root rot.

Root rot is caused by overwatering, which suffocates the roots and restricts oxygen flow, resulting in damaged roots. Yellowing leaves and squishy roots characterize root rot. You can save your spider plant by repotting it, providing adequate sunlight, and allowing the soil to dry out.

I understand that root rot is a major problem for some plant owners. Today, however, we will learn about the root cause of spider plant root rot and treat it. We’ll also go over how to avoid root rot and give you some pointers on how to take care of your spider plant and keep it healthy.

After your beloved plant has been damaged, you find that root rot is the result most of the time. They spread beneath the soil, and you may not notice until the matter has become complicated and out of hand.

The following are the different signs that indicate that your plant is suffering from root rot.

Wilted spider plant leaves can signal various problems, including under watering, pest infestation, or root rot. These symptoms indicate a deficiency in nutrients or roots that are unable to absorb the necessary nutrients. Internal difficulties such as root rot may impact the leaves, which will lead to more problems if the roots are unhealthy for a long time.

When the plant roots are in trouble, the plant will suffer the most. When they are damaged by root rot, they become weak, mushy, and discolored. The primary difficulty is that you won’t see that your plant is suffering so much from within.

If the plant isn’t acting right and there aren’t any visible indicators from the exterior, dig deeper and pull the plant out to inspect the roots. Also, don’t be alarmed if the roots break down as you’re pulling the plant out; the roots have gotten weak, as we mentioned previously.

Root rot might impede the growth of your spider plant. It isn’t very pleasant, yet it is true since the roots are harmed. When the roots and soil are bad, the entire plant suffers. The roots and soil health may not be visible in the leaves for a long time, but if you don’t see any new growth in your plant, root decay could be the cause.

Because the symptoms aren’t always obvious, you might not realize it at first. However, inspect the roots as soon as you see no new development for a long time, and all other circumstances are in order.

Black spots on the leaves often indicate root decay on your spider plant. Overwatering or infections are the most common causes. Pathogens grow quickly and take over the roots of your spider plant for an extended period, eventually killing the plant.

A bad odor coming from the roots is one of the early indicators of root rot. If you’re not aware of it, don’t worry; all you have to do is look for an unusual odor emanating from the soil and roots. The roots are the ones that have been impacted and are smelling bad since they have become slimy, mushy, brown, and smelly. The good news is that if you detect the odor before it affects the foliage, you may be able to spare your plant from further harm. 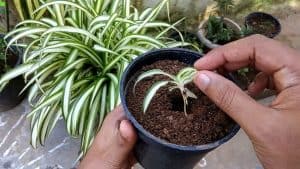 The following are the different factors that cause root rot in spider plants.

The extra water in the soil suffocates the soil and roots, making breathing harder for the roots. Water and nutrient movement and uptake will be hampered, hurting the plant’s health. The roots will become weak and susceptible as a result of this disease. The roots will rot, become disease-prone, and it won’t be easy to keep them alive. Because they can’t operate and regulate the passage of air, water, and nutrients in and out of the other sections of the plant, waterlogged soil and roots become dysfunctional.

Planting the spider plant in a pot that can’t drain extra water causes waterlogging. Soil composition has an impact on drainage. To drain excess water, make sure the planter has multiple drainage holes at the bottom. Allowing the soil to dry before watering is another option, as is avoiding planting in clay-rich areas. Plant in a smaller container if the soil seems dry and not damp; larger pots tend to hold water.

Pathogenic infections are one of the most common causes of spider plant root rot. It is caused by overwatering and damp soil, which promotes fungus development.

Because the spider plant is pot-bound, it cannot bloom in any container. The roots may expand broader in a larger pot, necessitating more water. Waterlogging in the soil limits growth in smaller containers. Make sure you have the correct pot before you start planting.

To quickly alleviate the effects of root rot, repotting is required. If the problem is extremely severe, the plant may die. We need to be delicate with the repotting process because it stresses your plant, which is already stressed.

Steps followed to get rid of the plant root rot:

Although root rot is a common problem for gardeners, it is recommended to cure your plant as soon as possible. If the fungus spreads further, a plant with decaying roots is vulnerable to death.

Rather than losing your lovely spider plant, make sure it has a good drainage route. It should also be grown in a clean environment free of fungus infection.